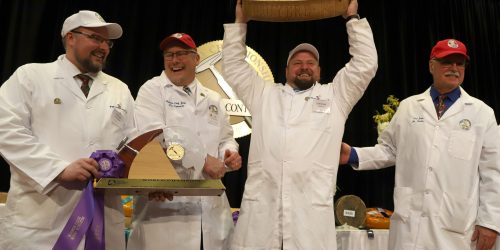 Madison, Wisconsin, U.S.A. –  A Gruyere from Bern, Switzerland has been named the 2020 World Champion Cheese.  The cheese, called Gourmino Le Gruyère AOP, is made by Michael Spycher of Mountain Dairy Fritzenhaus for Gourmino AG.  Spycher also won the 2008 World Championship Cheese Contest with his Gruyere.

Earning an impressive score of 98.81 out of 100, Gourmino Le Gruyère AOP bested a record-breaking 3,667 entries in the 2020 contest.  Produced for the past 900 years in the region surrounding the small town of Gruyère, Gourmino Le Gruyère AOP is still made today according to the traditional recipe.  The cow’s milk cheese has a subtle, sophisticated flavor after ripening up to 24 months in mountain caves.

First runner-up in the contest, with a score of 98.70, is Gallus Grand CRU, a hard cow’s milk cheese made by Hardegger Käse AG of Jonschwil, St. Gallen, Switzerland.  Lutjewiinkel Noord Hollandse Gouda PDO, a mature gouda aged four to ten months, made by Royal FrieslandCampina-Export earned the second runner-up position with a score of 98.66.

“For generations, cheesemakers have honed their craft with a commitment to excellence, and that shows in the work of World Championship Cheese Contest winners,” said John Umhoefer, Executive Director for the Wisconsin Cheese Makers Association, which hosts the biennial competition.

A total of 26 nations were represented in the 2020 World Championship Cheese Contest, and U.S. cheesemakers dominated the competition, earning gold medals in 90 of the 132 contest classes. Cheesemakers in The Netherlands came in second with ten golds, and cheesemakers in Switzerland earned seven golds.

The World Championship Cheese Contest, initiated in 1957, is the largest technical cheese, butter, and yogurt competition in the world. A team of 62 internationally-renowned judges technically evaluated all entries over the three-day competition held in Madison, Wisconsin.

For more information on the contest, as well as complete results for all entry classes and contest photos, visit www.WorldChampionCheese.org.